THURSDAY
1) I almost missed the bus. The doors were closed, fortunately a driver lets me in. I have never anybody seen to run along the Česká street [one of main streets in Brno] till yesterday - myself. Actually I would have seen myself, if I would have been free for looking at myself in shop window.
2) In the bus I sat near the man who entirely looks like John Locke. Not this John Locke - this one from the Lost series.
3) In Prague I went to TG Friday's restaurant immediately because somebody had told me the vanilla coke is sold there.
They just shake the classic cola with a vanilla syrup in the restaurant but it doesn't matter.
4) After vanilla coke me and my friend Jana went to the Village Cinemas to see [for the second time] Indiana Jones and the Kingdom of the Crystal Skull.
5) After the cinema we went to Tesco. There was a short scene:
Saleswoman: [in Czech] 218 Czech crowns
Foreigner woman who doesn't speak Czech: [in English] How much is it in Euro?
Saleswoman: Euro? ... 8,71.
Foreigner woman gives her some coins.
Saleswoman: We not accept.
Foreigner woman: What?
Saleswoman: We not accept the coins [disapprovingly shakes her head]
Foreigner woman: Why don't you want to take it?
Saleswoman: We not accept the coins [she has an obstinate expression in her face]
My friend Jana to the foreigner woman: [in English] They don't except conis here, only the paper money.
Foreigner woman gives to saleswoman paper €10 and says: Such people who don't speak English like you are should not work here!
Saleswoman pays her back and says: I don't understand you. I don't care about it.
Foreigner woman goes away and it's our turn now. The saleswoman load the first thing and continues in her speech: ...I don't know what she said, I don't care. Let she speak what she wants. I'm not interested about it because I don't understand her...
Then she stopped the loading of our wares and continued with a bitching and railing against foreigns who want to buy.
Me: Could you go on with your purchase please? We are in hurry.
Saleswoman: ...and the most resent people are those who urge me along!
5) After the shopping me, Jana and her boyfriend Vladimír went to find two caches. The first one was on the bus centre and the second one was near the Smíchov graveyard. Nothing funny after the Indy's movie I have to say.

FRIDAY
- I met just two members of a group 3B [Bartošek-Brandejs-Brandejsová]. It's a pity.
- Me and my friends went to find Rieger's Ghost. When I asked about the cache, they said we just have somewhere to find Something. The Something show us where we have to go then. There we should find Something else and with the Something else to count geggraphic coordinates of the final cache.
Yes. With the notebook and passers's help the Something and Something else were found. The final cache geggraphic coordinates was counted, but it showed place far away from a place where the final cache should be.
So we have flutterred in Riegers park and tried to find the right numbers and then I then met an unknown boy with a girl and they - when they was passing me - said to me "a light for the Venus". WTF?
When I returned to my frineds, they said me the geggraphic coordinates had counted by wrong way but at the moment they had a new ones.
When the cache was found and we logged in, I saw someone logged ten minutes before. It was boy and girl...
by Bára v 11:49 PM No comments:

keywords: brotherhood of the cat paw, out of brno 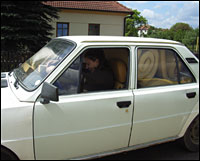 This weekend was in a spirit of christianity.

I spent this weekend with a bunch of my Christian friends wich I had met for the first time in a Christian action in 2003. We all of us had been in a organisation team there and since then we call our bunch as "Flag-bearers". Since the action we meet together regullary two times in a year.
At this last meeting we all have concluded: [citation] "although it is not expectable, we Christians are as duffers as all the other people".
Furthermore I have learnt what's the difference between a lady and a diplomat:
When a diplomat says yes - he thinks maybe. When he says maybe - he thinks no. When he says no - he is not a diplomat.
When a lady says no - she thinks maybe. When she says maybe - she thinks yes. When she says yes - she is not a lady.

Because this is a little christian spot, here goes a christian joke:

keywords: fun, out of brno, religio

I really usually don't look for movie mistakes, but in Indy's case I have started to think about one right at the cinema:

Colonel Doctor Irina Spalko, the "Stalin's favourite person, award holder of the Order of Lenin, the highest decoration in the Soviet Union, three times for outstanding services rendered to the State, and the honorary title of Hero of Socialist Labor for exceptional achievements in the national economy and culture" just could not be the "Stalin's fair-haired girl" because:
1) This Indys case is situated to the year of 1957. Stalin died in 1953.
2) If she had been "Stalin's fair-haired girl" in his days, she probably had not boasted about it in 1957. This is one year after the Khrushchev attacks the veneration of Stalin as a "cult of personality" and Stalin already wasn't as venerated as before.
3) No one intelligent boast to be a Stalin's favourite.

Yes! There it is!

I still don't understand why did she run away from him...
by Bára v 1:38 PM No comments:

Mersey has a new inside look with two new couches with low tables beside two high tables with desks. And they add two rooms there.
In Mersey:
They have canceled everythursdays "Hairy oldies party" [I liked it]. It was replaced by "Not only oldies party" [I donť like it].
They have a new DJ in thursdays parties. This DJ doesn't look like homeless like the first one did, but it's not the same indeed.
There is no charge to Thursday party as used to be.
There is no plenty of people in May.
There is closed the 2nd floor in May.
Vodka, rum and a peppermint liquer are only for 20,-. Gah.
The Night bus from Mersey doesn't go through my home place!
by Bára v 1:40 AM No comments: 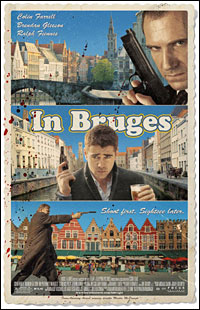 Me and Martin were in cinema yesterday. The most important thing of the evening was that we have bought the tickets in advance on the internet so we didn't have to be in cinema half an hour before the movie beginning.

The movie: In Bruges
Smart funny, sentimental, action, bloody, rude and once more funny.
Five stars of five for a background, dialogues, performance [I'm going to forgive Farrel the idiotic Alexander]
The movie could be reccomend for pople who likes Pulp Fiction, Lucky Number Slevin, Hot Fuzz.
The movie should not be reccomend for hard-core fans of Harry Potter because Fleur Delacour already won't be as she used to be for them. There are also Mad-Eye Moody and You-know-who in the movie but their characters are not as changed as the Fleur's is.

PS: The main reason I write about this movie is that we are going to film premiere of Indiana Jones tomorrow. I like In Bruges movie and its poster but it will be changed tomorrow and I would like to have it on my blog still in the furture.
by Bára v 11:57 AM No comments:

The trailer of the second [the first one is here] most expected movie of the year:

Not without a book

The last brigade would be a lesson for me about a bringing a book whenever and wherever I go even more thoroughly I have done it by now.
Through my working verve my right shoe with my right leg was skewered on a rusty nail. With this injury one is unusable for a work and to just waiting for a few hours is a real boredom.
by Bára v 11:29 AM No comments:

keywords: about my life, out of brno

On Tuesday I and the other Cats [the Secret friend of us and her sister nicknamed Cinderella] decided to not to stay at home on Thursay [today, 8th May is a bank holiday in Czech republic] but to go geocaching. So we have created an account on geocaching.com as the team named Brotherhood of the cat paw [the Brotherhood of the cat paw is from the Czech well known adventure stories and comics about the Rapid Arrows].
So.
Today we borrowed Martin's PDA with geocaching PDA software and a map and took a paper with a caches description and a map of caches printed from geocaching.com.
Hum. The software was unavailing because it was impossible to catch signal. And when it finally happens, the PDA shutted down. Fortunately we had the description and the map on papers and the Secret friend of us, too. With all of that the caches was, except this one, always finded. Nevermind. The last one we will try to find again, but this time it will be at night [without all bystanders] and we will invite to finding our boyfriends to help us.
by Bára v 7:03 PM No comments:

keywords: about my life, brotherhood of the cat paw, secret friends of us

Today is the big day because:
1) I was propositioned to be opposed of two thesis [A. who ask me for that thinks I know the situation of the subject of the first one. About the second one, she know I have a long-time practice].
My mum thinks I'm very successful and she also thinks the main part of this my "success" consist on fact that I used to go to Faculty of Arts to straighten the books in library [my mother worked there for a few years] in my kindergarten age [btw I have straighted the books at the same place where the thesis defences in nowadays are].
2) I discovered the word "hamburger" is not consist of the words "ham" and "burger, but it takes its name from the town of Hamburg in Germany. Really. You can also look at Wikipedia.
by Bára v 3:45 PM No comments:

I'm sitting in my ex-office at my ex-work and correcting their webpage now. Hist!
by Bára v 5:43 PM No comments:

keywords: job
Newer Posts Older Posts Home
Subscribe to: Posts (Atom)
This blog is just one of my ways how to improve my English. I know that my English is not very good now. Be patient with me, please. And of course, correct my mistakes, if you would like.
I started to write in English in November 2007 and inchmeal I would like to translate to English whole my Czech blog.