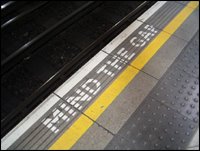 The most important person of the week: Emma Clarke

Metro: Voice of Tube sacked for spoofs
The Independent: Please, mind the gap: The people behind Britain's most iconic voices
Thisislondon.co.uk: Meet Miss 'Mind the gap'
Yahoo News: London PA voice fired for slamming Tube
And so on...

By the theme, yesterday me and my collegue talked about the London Underground in the Prague metro. We both love the London Underground [and we both hate the Prague metro]. We would like to go to London and to spend the whole day in the Tube.
The collegue has a Tube map as a desktop in his computer. Of course, he was delighted when he saw my little "Underground" flashlight. I think he's going to London as early as possible. He told me he would like to buy a large paper map of London Underground there. But he has a problem: how to get a large paper map of Tube from London to his flat in Brno without any kind of damage?

PS: By the way, I love the Moscow metro too. It is as intriguing as the London Underground for me. And I have to say, the Moscow Underground has a very special and beautiful stations [some stations look a little bit scary]. Look at photos.
by Bára v 10:59 AM